WASHINGTON, Nov. 21, 2018 /PRNewswire/ — James Hadley Billington—the United States Librarian of Congress Emeritus, one of the world’s foremost Russian historians, and a leading American academic and author who taught at Harvard and Princeton before serving 42 years as CEO of four federal cultural institutions—died peacefully yesterday in Washington, DC, after a brief illness, surrounded by his family. He was 89 years old. 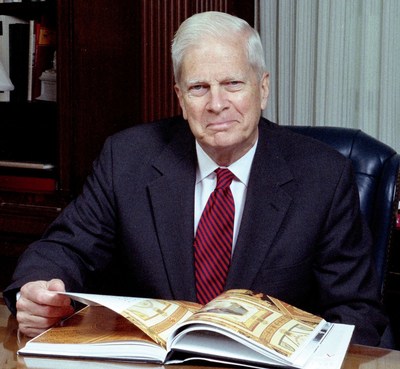 Dr. Billington served as the 13th Librarian of Congress after being nominated by President Ronald Reagan in 1987, an appointment unanimously approved by the U.S. Senate. He retired as Librarian on September 30, 2015.

Over a 28-year period, he founded the National Book Festival with First Lady Laura Bush, the John Kluge Center and Prize for the Study of Humanity, the Gershwin Prize, and The National Audio Visual Conservation Center.

Throughout a life dedicated to scholarship and service—during which he served every President and Congress since the 1960s until his retirement—Dr. Billington played a unique role in preserving, promoting, and sharing America’s rich cultural heritage.

Born in Bryn Mawr, Pennsylvania, June 1, 1929, he was educated in Philadelphia-area public schools. Dr. Billington was valedictorian at Lower Merion High School and Princeton University, where he graduated with highest honors in 1950. In 1953, he earned a modern Russian history doctorate from Balliol College of the University of Oxford, where he was a Rhodes Scholar.

Dr. Billington received 42 honorary degrees, as well as the US Presidential Citizen’s Medal, the Russian Federation’s Order of Friendship, and the French Chevalier of the Legion of Honor.

Following U.S. Army service in President Eisenhower’s Office of National Estimates, he taught history at Harvard University from 1957 to 1962, and at Princeton University, where he was a popular professor from 1964 to 1974.

From 1973 to 1987, Dr. Billington was director of the Woodrow Wilson International Center for Scholars, where he founded the Kennan Institute for Advanced Russian Studies, seven other new programs, and the Wilson Quarterly.

Dr. Billington authored nine books, including the classic Russian cultural history, The Icon and the Axe and The Face of Russia, a companion book to the PBS television series.

Dr. Billington spent more than 50 years helping America’s leaders and citizens better understand the former Soviet Union and its successor states, contributing to a greater appreciation of America’s values and institutions in countries stretching across one-third of the globe.

He first visited Russia in 1958, and accompanied the President and First Lady, Ronald and Nancy Reagan, to Moscow in 1988 for Reagan’s summit meeting with Mikhail Gorbachev.

During his 28-year tenure at the Library of Congress, Dr. Billington enlarged and technologically enhanced public spaces in the Thomas Jefferson Building, re-purposing it as a national exhibition venue that hosted over 100 exhibitions, many featuring materials never before publicly displayed in America.

He doubled the size of the Library’s traditional analog collections to more than 160 million items and oversaw innovative preservation initiatives. Dr. Billington pioneered the reconstruction of Thomas Jefferson’s original library, using private funds raised from the Library’s James Madison Council, which he founded.

Dr. Billington also founded the Open World Leadership Center, which enabled over 27,000 Eurasian leaders to engage and learn from the democratic process.  Simultaneously, he created a massive new Library of Congress online presence and launched a series of innovative Library programs to share the educational riches of the Library with millions of Americans and the world.

Dr. Billington is survived by his wife of 61 years, the former Marjorie Anne Brennan, whom he described as his “indispensable full partner in every way and at every stage of his adult life”; four children, Dr. Susan Billington Harper, Anne Billington Fischer, the Rev. James Hadley Billington, Jr., and Thomas Keator Billington; and 12 grandchildren.

A high-res photo of Dr. Billington is available by clicking here.

Statement from Mrs. Laura W. Bush:
“President Bush and I are saddened to learn that the United States has lost Dr. James Billington. Dr. Billington served as our nation’s librarian for 28 years, leading the Library of Congress’ transition into the digital age. In 2001, he was instrumental in the creation of the National Book Festival, which has welcomed hundreds of thousands of book lovers to the National Mall and to the Library of Congress. Dr. Billington’s lifelong passion for research and for preserving history ensures that America’s most prized literary treasures will be available to all for generations to come. President Bush and I send our heartfelt condolences to Dr. Billington’s wife Marjorie, and to their four children. He will be missed.”

Statement from Nancy Pelosi, U.S. House Democratic Leader:
“The passing of Dr. James Billington is a profound loss for his family and loved ones as well as for our nation. Over the course of his long and prolific career, Dr. Billington became a tireless steward for American history, helping protect and preserve our nation’s most treasured past for generations of Americans.

“Dr. Billington was a public servant of exceptional intelligence, dedication and vision. His tenure at the Library of Congress saw the doubling of the Library’s collection and the beginning of its now vast online resources. Dr. Billington firmly believed that the treasures of American history in his care belonged to the people, and he worked passionately to ensure that Americans across the country could access these priceless collections.

“Whether teaching at Harvard or Princeton, collaborating with experts and academics, or being a trusted teacher and advisor for countless Members of Congress, Dr. Billington was a committed educator. His dedication to expanding the Library’s educational programing has allowed a generation of young Americans to discover their love of history and become inspired to engage in our great democratic experiment.

“Our nation has lost a true patriot and one of its most relentless defenders. Dr. Billington’s life and remarkable legacy have left an indelible mark on our unique American story, allowing generations of young people to see, experience and learn from the history he so passionately promoted. May it be a small comfort to his loving wife, Marjorie, their children, Susan, Anne, James Jr., and Thomas, and the entire Billington family that so many mourn with them at this difficult time.”

Statement from Former U.S. Secretary of State Condoleeza Rice:
“I am deeply saddened by the news of Dr. Jim Billington’s passing.  He was an original — brilliant, thoughtful and kind. He led the Library of Congress with skill and passion. On a personal note, he was a great role model for me as a scholar and a public servant. His timeless work, The Icon and the Axe is quite literally the book that drew this failed music major to the study of the Soviet Union. Such was the reach of his influence in the field. I join all of his friends and colleagues in sending my thoughts and prayers to Marjorie and the Billington family.”

Statement of Nina Khrushcheva, Professor of International Affairs, The New School and the granddaughter of Leonid Khrushchev, the eldest son of former Soviet Premier Nikita Khrushchev
“Dr Billington was such a towering figure in the Russian studies and in the field of the US-Russian relations that he would be thoroughly missed for decades to come. In his work, either as a scholar or a librarian of Congress, he brilliantly merged art and politics, all for the purposes of the United States better understanding and appreciating other cultures around the globe. Russia, his area of expertise, was particularly lucky. James Billington’s book, The Icon and the Axe, was itself an icon for the generations of both the Russians and the Russianists. In the dark days of the Soviet Union we, the Russians, tried to understand our own culture through Dr. Billington’s critical, knowledgeable and kind eye. At the same time, his philosophical and historical approach to the complex country of bombs, ballet and Brothers Karamazov became a road map for the study of Russian culture and politics for many scholars following in his steps. May his soul rest in peace.”

Statement of David M. Rubenstein on the Passing of Dr. James Billington November 21, 2018:
“Jim Billington was one of the finest public servants – indeed one of the finest Americans – I have ever been privileged to meet. His dedication to our country, and in the last three decades of his life to the Library of Congress, places all Americans his debt. Jim helped transform the Library of Congress into the library of the American people – a national treasure available to and benefiting all Americans. Those of us who were fortunate to know and work with him will miss him dearly.”