DUBAI, UNITED ARAB EMIRATES – Media OutReach – 6 January 2023 – Tia Lee Yu Fen has collaborated with Grammy award winning DJ duo NERVO on a remixed version of her global C-Pop hit “GOODBYE PRINCESS”. The remix has been gathering plaudits from around the world and follows the incredible successes of the “GOODBYE PRINCESS” music video and it’s record-breaking animated pre-release series. Both releases gathered over 100 million views at incredible speed, with the music video hitting 100 million views on YouTube inside 19 days. 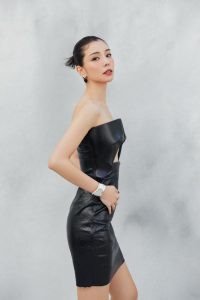 Tia partnered with Australian DJs Olivia and Miriam Nervo – who have worked with some of the biggest names in the music industry, including Kylie Minogue, Ke$ha, Armin Van Buuren, Afrojack, Steve Aoki and The Pussycat Dolls. They also won a coveted Grammy Award for writing David Guetta and Kelly Rowland’s blockbuster song “When Love Takes Over”.

NERVO’s association with Tia Lee does not stop with the remix of “GOODBYE PRINCESS” as the top-ranking DJs have also joined Tia’s #EmpowerHer charitable movement. NERVO believe in the charitable ethos of the campaign, which encourages women to strive for a better future, and supports organisations helping to make this happen.

“We’ve had a long history working with Asian pop stars so we jumped at the opportunity to remix Tia’s great tune! ‘Goodbye Princess’ is already such a memorable song with a powerful message about empowerment, but we wanted to make the production a bit crunchier for real dance music fans. We hope everyone loves it as much as we do!” Olivia and Miriam Nervo said.

Under the #EmpowerHer movement, Tia has pledged to make donations to four charities, totalling up to HKD3.8 million. The figure was chosen as a nod to International Women’s Day on March 8, 2023.

Tia Lee Yu Fen, born in Taipei, is a global C-Pop star, fashion icon and film and television actress. In addition to her acting roles and musical career, Tia appears frequently at major fashion shows. As a trend-setter, Tia has graced the covers of fashion, beauty and lifestyle magazines such as Vogue, Elle, Marie Claire, and shares her beauty and fashion tips through a number of Vogue’s social media channels.